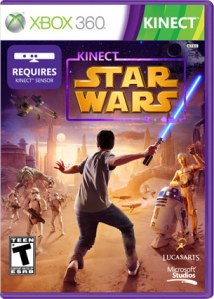 After what seems to be a long delayed release Star Wars for the Xbox 360 Kinect is finally set to hit stores this April. The original announcement of Star Wars Kinect was made back at E3 and was to debut before Christmas 2011, however that didn’t happen. The new game will have five dynamic modes – Jedi Destiny: Dark Side Rising, Pod racing, Rancor Rampage, Galactic Dance Off and Duels of Fate – “Kinect Star Wars” makes it possible for Star Wars fans of all ages to delve into immersive Star Wars experiences. In addition to the previously announced Jedi,  Pod racing and Rancor modes, Xbox 360 and LucasArts have unveiled new additions to the game, including:

Space battles: As you travel the Galaxy to face an evil that threatens to undermine the fabric of the Republic, you’ll engage with forces of the Empire in intense space battles

New duels: Battle opponents like Count Dooku and Darth Vader on your journey to become a Jedi

New Duels of Fate mode, a battle-by-battle experience to sharpen your Jedi skills against the Dark Side.

New Galactic Dance Off mode loaded with Star Wars-themed pop tunes where those still honing their Jedi skills can take a break to battle Darth Vader on the dance floor or bust a move “Solo style.”

Dance off mode! Really? That explains the delay! Anyhow being a geek I will buy the game as it was on my Christmas wish list and I do enjoy whatever George Lucas gives us Star Wars wise including Jar Jar Binks.