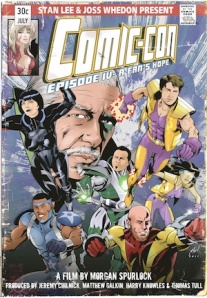 Documentary filmmaker Morgan Spurlock is back at it again. Know for such documentaries as Super Size me and the Fx Channel show 30 days Spurlock has released the trailer to his newest venture. Filmed at last years Comic Con; Comic Con Episode IV: A Fan’s Hope takes a deep behind the scenes look into the attendees of the annual San Diego Comic Con. Interviewees include: Cosplay Fans, Memorabilia Collectors, various Artists,  and many celebrities and Comic Artists . Of note this film is Executive Produced by Harry Knowles , Stan Lee and Joss Whedon.