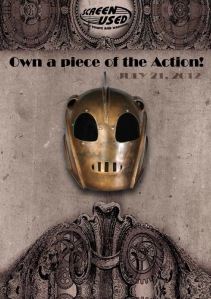 San Jose, Calif. — ScreenUsed, co-owned by Desi DosSantos and Jeff Castillo, have announced today their company will hold it’s first on-line auction through iCollector.com. A number of rare, authentic props and costumes from the Back to the Future series will be included in this debut auction.
The two business partners founded ScreenUsed in 2003. What began as a hobby for them in the 1990s has grown into one of the leading companies providing original Film & Television production memorabilia to collectors worldwide. Their mission from the start has been to keep ScreenUsed as a small, customer friendly service that is built on reputation. They are serious about authentication when acquiring pieces for the website and this auction, as they know their future depends on it. Each production piece in this auction will include a descriptive, signed ScreenUsed COA.

“We feel there is demand in the market for a mid-tier auction offering – not the million dollars per item level, nor the warehouse blowout level,” states DosSantos. “We feel confident this is a nice compilation of items that will hopefully have something for everyone and at varying price levels. Furthermore, we want to bring the ScreenUsed brand of customer service that is unparalleled from the retail side and apply it to auctions. We feel that our business is about relationships and we believe treating people well is good business.”

There are no reserves on the auction lots; the starting price is where the auction starts.