Reelz Channel Premiered Season 2 of their Hollywood Memorabilia centric Beverly Hills Pawn on November 6th 2014. Honestly I did not watch until the season 2 premiere and at that point I got caught up on season 1 thanks to Reelz for running a marathon set of episodes back to back.

Beverly Hills Pawn (aka The Dina Collection)is not a bad show but it is obviously staged as is most reality shows are including History Channels Pawn Stars. I like it only because I get to see various Hollywood memorabilia featured in each episode and since Syfy didn’t renew Hollywood Treasure; Beverly Hills Pawn will have to fill the gap. It is noteworthy that reruns of Hollywood Treasure are now on Reelz Channel.

Beverly Hills Pawn airs on Wednesdays at 9pm, Check your cable listings for the channel. 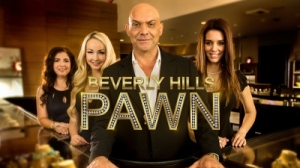 “Beverly Hills Pawn” explores Yossi Dina’s extraordinary pawn shop in the heart of world famous Beverly Hills where Hollywood’s elite go to find a lot of cash…fast. The master businessman and former army captain runs his luxury shop with an iron fist and is known for his savvy negotiating and his superior taste. Yossi makes million dollar pawn deals at a moment’s notice for masterpieces, gems, antiques and priceless Hollywood treasures only attainable by the rich and famous. Each episode follows Yossi and his loyal team as they put hundreds of thousands of dollars at stake for incredible collectibles. “Beverly Hills Pawn” is produced by Asylum Entertainment.