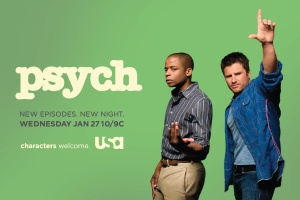 two-hour musical, Universal Cable Productions’(UCP) and USA Network’s original scripted comedy series from Steve Franks, “Psych” will end its successful run on Wednesday, March 26. To commemorate this momentous occasion, leading Hollywood collectibles auction site ScreenBid will host an exclusive online auction of about 200 props and memorabilia straight from the set of “Psych.”  Launching on March 21, the auction will run for seven days, and will include a live auction of the “Blueberry,” the show’s iconic 2004 Toyota Echo, on the “Psych After Pshow” airing directly after the series finale on USA Network.  UCP’s proceeds on all sales will benefit the Alzheimer’s Association which was personally selected by Creator/Executive Producer Steve Franks.

Other items for auction include:

Fans can preview the auction online now at www.screenbid.com.

ScreenBid is the world’s best source for certified authentic, screen-used Hollywood memorabilia and collectibles. ScreenBid works with studios, producers, and directors to make available to the public only objects that were used onscreen or in production on a movie or television show. ScreenBid uses the SAM auction platform and bidding is easy, and every ScreenBid item comes with a studio certificate of authenticity.