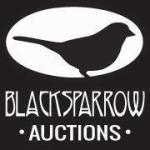 Fans and collectors of Planet of the Apes take note,  Blacksparrow Auctions along with Creature Features is having an upcoming auction dedicated to the franchise. The Planet of the Apes auction will be taking place online on July 20th 2014 at 11am pst. Screen Used memorabilia from the original 1968 Charlton Heston to The 2011’s Rise of the Planet of the Apes will be featured.   The Proceeds of the auction will benefit the Center for Great Apes, a permanent sanctuary for orangutans and chimpanzees located in Wauchula, Florida. The center serves as a place of retirement for several entertainment and celebrity primates. Check out some of the lots in the auction below there are some very cool items.

Blacksparrow is excited to announce the Auction of the Apes!We have partnered with Creature Features to celebrate over five decades of the Apes franchise. This live event features original costumes, props, prosthetic molds, posters, production & commerical artwork, action figures and autographs from the original 1968 Planet of the Apes to 2011’s Rise of the Planet of the Apes.

Select auction items will be on display at Creature Features located at 2904 W. Magnolia Blvd. in Burbank, CA. Click here to register and bid now.In addtion, Creature Features is kicking off the celebration with a curated art show starting this Saturday, June 21st, from 6 to 10pm. Come join us and Go Ape!For info on auction registration or other questions relating to the auction, please visit blacksparrowauctions.com 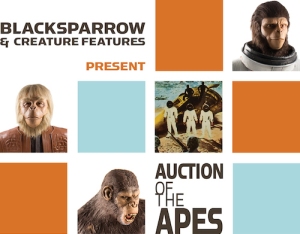