UK based The Movie Prop Warehouse has announced a series of Prop and Costume listings from the 2009 Wes Craven re-imagined “The Last House on the Left”. MPW owner John Page advises that there will be around 40 original props and costumes listed in retail format from the horror/thriller starring Aaron Paul (Breaking Bad).

Collectors/Fans can expect to see costumes from all of the main cast members in the series of daily listings including an Aaron Paul bloodied shirt pictured below. The Last House on the Left Listings begin on Sunday October 18th, 2015 with 8-10 items being listed each day of that week with prices starting from £10.00.

The listings can be view at http://www.moviepropwarehouse.com/ 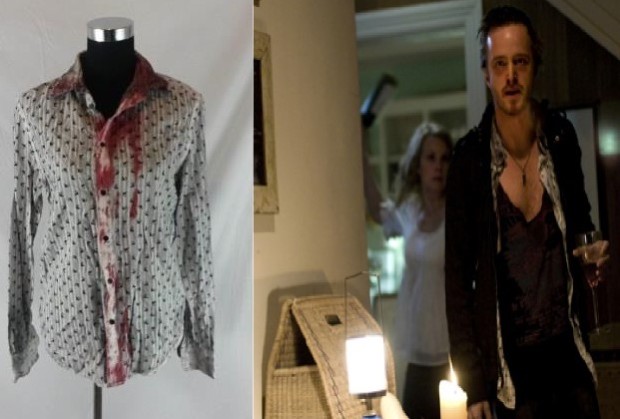 The Last House on the Left (2009) – Masters of horror Wes Craven and Sean Cunningham revisit their landmark film that launched Cravens directing career and influenced decades of horror films to follow: The Last House on the Left. Bringing one of the most notorious thrillers of all time to a new generation, they produce the story that explores how far two ordinary people will go to exact revenge on the sociopaths who harmed their child.

The Movie Prop Warehouse was founded in 2009 by movie prop collector John Page. We are a UK company based in North East England, an area rich in film history, with films such as Robin Hood: Prince of Thieves, Get Carter, Alien 3, Harry Potter all filmed on our doorstep. We are particularly interested in items from any films either filmed or based in the North East of England