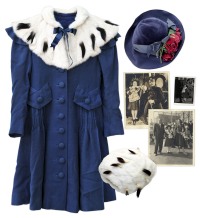 timed auction is open to bidding until January 14th at 5pm and features about 11 lots of memorabilia from the legendary child actresses career. Previously Nate Sanders offered around 30 lots of Shirley Temple costumes and other memorabilia back in August 2015. The opening bid for the costumes of the late actress is $7,000.00 and as of the time of this article there are bids “yet”.

The auction is now live at natedsanders.com and runs through January 14th 2016.