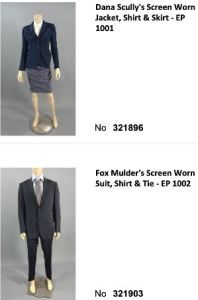 episode tenth season of The X-Files. The six episode run that recently aired on Fox television was awesome to say the least and has most of us wanting more. So in the absence of more X-Files entertainment perhaps you would be interested in owning some props and/or costumes used in the making of the most recent episodes.  Thanks to VIP TV and Movie Auctions you can get your hands on that screen used artifact very soon.

The X-Files official series auction starts on Tuesday March 22nd 2016 on the Ebay page of VIP TV and Movie Auctions, see link below. The auction lots will run in typical Ebay format with a 6 or 7 day bidding period. Once the a bidding period has ended a new group of items will be listed for bidding every week until the production is sold out.

A preview catalog has been furnished by VIP TV and Movie Auctions that can be viewed at the link below. There are plenty of costumes worn by David Duchovny and Gillian Anderson as well as tons of props including the FBI badges of the main cast.

About VIP TV and Movie Auctions: