It’s not very often I get to write about the monthly auctions by Nate D. Sanders, what changed? well they added

something new this month. DC comic fans the January auction features iconic costumes from two of the most revered heroes. The heroes one from Gotham and the other of Metropolis, that’s right Batman and Superman! This months Nate D Sanders auction features costumes worn by two of the best to portray those characters Micheal Keaton and the late Christopher Reeve.

About the Michael Keaton Batsuit, it’s important to know that it is not all screen used. Per the listing “Original parts of the costume worn in the film are the cowl, cape and body” “the gloves, belt, insignia and shoes are replicas for the display”. Still a very nice piece on a custom display mannequin with a starting bid of 35,000 us dollars. Lot# 104.

Now the Superman suit or ”muscle tunic” worn by the late Christopher Reeve. The muscle tunic was used in the first Superman movie mainly for the flight scenes. A good thing about this is that it comes with the original Prop Store COA and for those that do not know the Prop Store is a renowned seller of all things movie props and costumes. The opening bid for this one piece is 40,000 us dollars. Lot# 160. 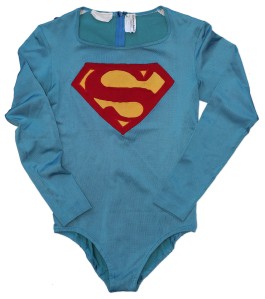