On Friday March 17th The Belko Experiment is opens in theaters nationwide. The same day as the release of the film the auctions begin for the props, wardrobe and set pieces used to make the hit movie. This and other auctions like it are brought to you by the largest seller of official direct studio Hollywood memorabilia VIP TV and Movie Auctions. 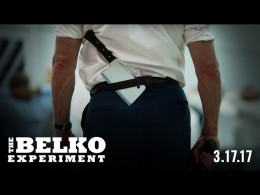 The Belko Experiment movie auction lots will run over a 6 day bidding period. Once the bidding period has ended a new group of lots will be listed every week until production is sold out. These type of auctions can run for several weeks or months.

The Belko Experiment is an Action/Horror/ Thriller about a twisted social experiment. 80 Americans are locked in their high-rise corporate office in Bogotá, Colombia and ordered by an unknown voice coming from the company’s intercom system to participate in a deadly game of kill or be killed.