Bonhams and Turner Classic Movies (TCM) have partnered again to present an auction that is out of this world! The “Out of this World” auction is scheduled to take place on Tuesday November 21, 2017. There are a lot of great items in this auction with the big item everyone is talking about the original Robby the Robot from the Forbidden Planet and many other notable appearances over the decades.  Of course with all the attention on “Robby” and rightfully so. This has been in the hands of the same collector for over 40 years making this offering a true iconic rarity.

A favorite of mine is hands down the George Reeves Superman costume. This is the second costume worn by George during the superman run as the first of the costumes was brown, white and grey made for black and white TV. The auction estimate is between 100,00–150,000.

Another interesting item getting some attention for a number of reasons is the Luke Skywalker Lightsaber from Star Wars:Return of the Jedi. It would be a dis-service to not mention that and I have a link to the article written by Jason Debord of The Original Prop Blog here. Update the Lightsaber lot is now withdrawn from the auction.

There are lots of items of interest in this auction here are a few that caught my eye:

Overall there are over 1400 items from various decades of film and television being offered by Bonhams and Turner Classic Movies. The Out of this World auction is definitely worth checking out as you may find that piece of memorabilia you must add to your collection. 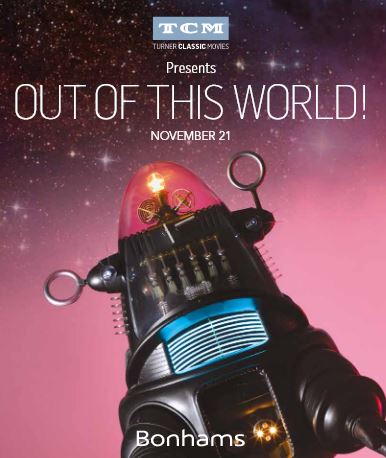