Ewbank’s, Surrey’s leading auction house, is preparing for a two-day entertainment sale, with memorabilia and movie props going under the hammer on February 28, and vintage posters on March 1.

Music fans will be delighted by the opportunity to snap up a Clearaudio Innovation TT-3 turntable, which carries a pre-sale guide price of between £1,000 and £1,500. This is part of a large consignment of high-end audio equipment that includes Wilson Audio Sasha Series II speakers, and Bang & Olufsen Beolab speakers amongst others.

An original prop mask designed and used in Pink Floyd’s 1982 musical film, The Wall, is going under the hammer with an estimate of between £800 and £1,200. It has been consigned for sale by Oxfam, and all proceeds will go to the charity. The mask has been signed by British illustrator Gerald Scarfe CBE, for Oxfam. Scarfe worked with Pink Floyd on their album The Wall, the ensuing film, as well as the video for Welcome To The Machine.

Another lot bearing famous signatures is a hardback copy, with dustjacket, of Harry Potter and The Philosopher’s Stone. The book is signed to the inside by Daniel Radcliffe (Harry Potter), Emma Watson (Hermione Granger), Rupert Grint (Ron Weasley) and Jamie Waylett (Vincent Crabbe). The vendor worked as a transport driver on numerous films, including Harry Potter. The book has been valued at between £400 and £600.

A brown synthetic leather waistcoat as worn by Michael Beck, star of the 1979 film The Warriors, has a guide price of between £5,000 and £8,000. The garment was worn throughout this landmark film, has black patterned piping with button front closure and handwritten in black ink near the internal label is ‘Swan’. The iconic vest features embroidered ‘Warriors’ title and insignia patches on the back. This is one of very few vests known to have survived production.

Another movie prop sure to garner buyers’ attention is a production-used static phaser rifle, used in the 1996 film Star Trek: First Contact. It has been valued at between £2,000 and £4,000, and comes with a copy of original invoice from Profiles In History. It was one of three versions, constructed of painted wood with decals and arm strap, and measures 36 inches long.

A crew gift statue from 2001 film Lara Croft: Tomb Raider is on sale, with an estimate of between £400 and £600. This metal ape-like humanoid statue was given to heads of department who worked on the film, it has been consigned by the family of Peter Wallace, who worked in the art department.

It stands on wooden engraved base, and is 16 inches high. Also included are two copies of unit lists showing Peter Wallace as ‘H.O.D. Rigger’, two premiere tickets for Leicester Square and a construction pass.

Among the many vintage posters on sale on March 1, is a poster advertising the 1966 film Carry On Screaming, starring Kenneth Williams and Harry Corbett, valued at between £300 and £500. The poster features artwork by noted poster artist Tom Chantrell.

A US half-sheet poster from 1969 film Bullitt, starring Steve McQueen, carries a pre-sale guide of between £200 and £400.

If you would like an auction assessment please contact the team at Ewbank’s. Ewbank’s is open Monday to Friday between 9am and 5pm at the Burnt Common saleroom in Send just off the A3.

Live internet bidding is available through 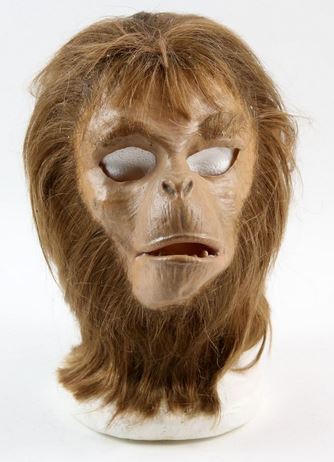