The re-imagined Child’s Play follows a young Andy Barclay after moving to a new city, receives a special present from his mother a seemingly innocent Buddi doll (yes that’s Buddi with an “I” not “Y”) that becomes his best friend. When the doll suddenly takes on a life of its own, Andy unites with other neighborhood children to stop the sinister toy from wreaking bloody havoc. This re-imagined film of the classic or dare I say classic 1980’s horror film is brought to you by the producers of another re-imagined film “IT”.

VIP Fan Auctions will be auctioning off various screen used props, wardrobe and other production material used in the making of the movie over the next several weeks on eBay. The auction is scheduled to run June 21st through July 26th 2019.  All items in the Child’s Play auction is direct from the studio and will include studio approved Certificate of Authenticity. See the eBay auction link below to get in on this auction action.

If you have never heard of VIP Fan Auctions; For close to 20 years, VIP Fan Auctions has partnered with television and film studios to offer props and wardrobe items from popular productions. VIP provides access to the largest worldwide marketplace through its top-rated auctions with a 100 percent positive customer feedback rating. VIP offers fans weekly access to entertainment collectibles as the auction partner of Hollywood’s largest entertainment studios at vipfanauctions.com. 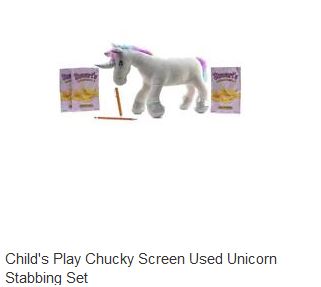