All of Steve Martin’s Proceeds of the Auction to be Donated to Benefit The Motion Picture Home in Honor of Roddy McDowall! 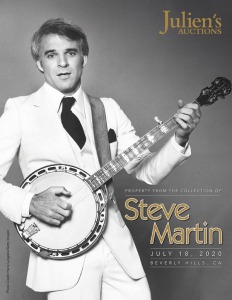 to benefit The Motion Picture Home in honor of Roddy McDowall, the late legendary stage, film and television actor and philanthropist for the Motion Picture & Television Fund’s Country House and Hospital. MPTF supports working and retired members of the entertainment community with a safety net of health and social services, including temporary financial assistance, case management, and residential living. For more info go to mptf.com

On offer is the most comprehensive collection of Martin’s iconic costumes and memorabilia ever assembled at auction from his films, television shows and specials, as well as awards, posters, musical instruments, magic props and personal items from one of Hollywood’s most revered comic geniuses and the acclaimed actor’s celebrated career spanning over five-decades.

Stephen Glenn Martin was born August 14th, 1945 in Waco, Texas. He began his comedy career in the 1960s as a writer for The Smothers Brothers Comedy Hour, where at the age of twenty-three, Martin won an Emmy award in 1969 for writing and made his first television appearance on the show. In the 1970s, Martin made frequent appearances performing his stand-up comedy on The Tonight Show Starring Johnny Carson, The Gong Show, HBO’s On Location, The Muppet Show and Saturday Night Live and toured in the nation’s top comedy clubs across the U.S.

Martin became one of SNL’s most iconic stars with viewership jumping by a million viewers during his star making guest appearances playing some of SNL’s most unforgettable characters in the late night sketch comedy series’ most classic skits: Georg Festrunk, one of the swinging Festrunk brothers along with Yortuk played by Dan Aykroyd; Theodoric of York,

the medieval doctor; his comic musical portrayal of “King Tut” with its novelty hit song recorded and released by Martin and his band “Toot Uncommons” which sold over a million copies in 1978; an IRS agent and bemused foil to the Coneheads; his happy feet dancing routine and more. Martin is one of the show’s most successful hosts appearing on twenty-seven Saturday Night Live shows and a fifteen-time guest-host. (photo left: Martin’s wild and wacky ties)

His platinum selling comedy albums Let’s Get Small (1977) and A Wild and Crazy Guy (1978) spawned two of the nation’s most popular catch phrases from its tracks “Excuse Me” and “Just a wild and crazy guy,” with the latter album reaching the No. 2 spot on the U.S. sales chart and selling over a million copies. Both albums won Grammys for Best Comedy Recording in 1977 and 1978, respectively. Martin became a phenomenon which led to stand-up comedy performances in sold out stadium sized arenas where the star wore a distinctive three-piece white suit that became a trademark for his act. (photo right: Martin’s three-piece white suit)

Hollywood soon called and Martin made his acting film debut in the 1972 film Another Fine Mess. His short film The Absent-Minded Waiter, which Martin wrote, starred in and directed, featuring Buck Henry and Terri Garr, would garner an Academy Award nomination for Best Short Live Action Film.

But it was his starring role in the 1979 comedy film The Jerk that established Martin as a bona fide box office Hollywood star. Directed by Carl Reiner from a screenplay written by Martin and two other writers, the film was a smash hit, grossing over $100 million. In 1981, Martin starred in his first serious film role in 1981’s Pennies from Heaven and re-teamed with director Reiner in three other hit comedy films: 1982’s Dead Men Don’t Wear Plaid, 1983’s The Man with Two Brains, and 1984’s All of Me, which is considered one of Martin’s most critically acclaimed performances. (photo left: Martin’s clap boards)

In 1986, Martin and fellow SNL veterans Martin Short and Chevy Chase starred as the Three Amigos directed by John Landis and written by Martin, Lorne Michaels and singer-songwriter Randy 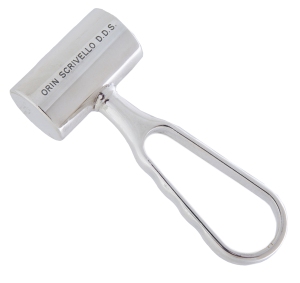 Newman. That same year, Martin starred as the sadistic dentist, Orin Scrivello, in the movie musical film version of the hit play Little Shop of Horrors along with Rick Moranis. In 1987, Martin joined comedian John Candy in the John Hughes cult classic Planes, Trains and Automobiles as well as starred in Roxanne, the film adaptation of the classic tale of Cyrano de Bergerac and co-wrote the Writers Guild of America Award winning screenplay. In 1988, he took the stage in the Broadway revival of Waiting for Godot, directed by Mike Nichols where he played Vladimir, opposite Robin Williams as Estragon and Bill Irwin as Lucky. (photo left: Little Shop of Horrors film prop)

From the late 1980s to 2000s, Martin would star in many critically acclaimed and box office hit films including, 1988’s Dirty Rotten Scoundrels directed by Frank Oz and opposite Michael Caine; Ron Howard’s Parenthood with Rick Moranis in 1989 and again with Moranis in 1990’s My Blue Heaven; 1991’s L.A. Story, a romantic comedy hit film whose screenplay Martin also co-wrote; Lawrence Kasdan’s film Grand Canyon, Father of the Bride (1991) followed by its sequel in 1995; 1992’s Housesitter with Goldie Hawn and Dana Delaney; 1994’s A Simple Twist of Fate, a film adaptation of “Silas Marner”; David Mamet’s 1997 thriller A Spanish Prisoner; 1999’s Bowfinger opposite Eddie Murphy, which Martin also wrote; 1999’s The Out of Towners, a remake of Neil Simon’s comedy, co-starring Goldie Hawn and more.

By 2003, Martin ranked fourth on the box office stars list, after starring in Bringing Down The House opposite Queen Latifah and Cheaper by the Dozen, each of which earned over $130 million at U.S. theaters. In 2005, he starred in Cheaper by the Dozen 2 and the following year, he starred in the box office hit The Pink Panther as the iconic Inspector Clouseau and reprised the role in the equally successful The Pink Panther 2, of which both films combined grossed over $230 million at the box office.

Other film roles included Baby Mama opposite Tina Fey and Amy Poehler, It’s Complicated opposite Meryl Streep and Alex Baldwin, The Big Year opposite Jack Black, Owen Wilson and JoBeth Williams, the animated film Home and the war drama Billy Lynn’s Long Halftime Walk. Martin is also an acclaimed author and playwright whose work includes: the 1993 full length play Picasso at Lapin Agile, which opened in Chicago’s famed Steppenwolf Theater Company and performed in Los Angeles, New York and other U.S. cities; the 2002 adaptation of Carl Sternheim’s off-Broadway play The Underpants; 2008’s Traitor starring Don Cheadle and the novellas, “Shopgirl” (2000), a New York Times best seller which was made into a 2005 film starring Martin and Claire Danes and “The Pleasure of My Company” (2003); his 2007 memoir, “Born Standing Up,” which Time magazine named as one of the Top 10 Nonfiction Books of 2007; the 2010 novel “An Object of Beauty;” the 2017 Broadway play Meteor Shower directed by Jerry Zaks whose cast featured Amy Schumer, Laura Benanti, Jeremy Shamos and Keegan-Michael Key; and the story for the upcoming Disney film, Magic Camp. Martin has hosted the Academy Awards in 2001 and 2003 and with Alec Baldwin in 2010. (photo left: Steve Martin’s Gibson banjo gifted by Queen Latifah)

Martin has received several distinguished honors throughout his career including a Grammy Award, an Emmy Award, a Writers Guild of America award, two People’s Choice Awards, five Grammy Awards, the 2000 American Comedy Award for Lifetime Achievement in Comedy, a Drama Desk Award for Outstanding Music, awards from the National Society of Film Critics, New York Film Critics Circle and Los Angeles Film Critics Association and more. In 2005, Martin was awarded the Mark Twain Prize for American Humor, as well as the Kennedy Center Honors in recognition of his lifetime of contributions to American culture in 2007. In 2013, he was awarded an Academy Honorary Award and in 2015, he received the AFI Lifetime Achievement Award.

One of the top highlights of the auction will be the sale of one of Martin’s trademark three-piece white suits (estimate: $10,000 – $20,000) worn during his sold-out stand-up comedy performances in the 80’s. This suit, consisting of an eggshell white blazer with peaked lapels and three front pockets, tailored by Giorgio Beverly Hills By Brioni, with a matching vest, a matching pair of slacks and a black silk necktie by Dior and a black silk pocket square, was the branding of an identity millions would come to recognize as the comedian, Steve Martin. This signature suit established Martin as one of the greatest comic geniuses of the era and would also be one of only three such suits that the star would ever wear. He had two of his white suits custom designed –the one on offer in this auction, and the other suit was donated to the Smithsonian Museum where it is currently on display.

Other highlights include film props such as:

“Julien’s Auctions is excited to present this auction event that celebrates the artistry of Steve Martin, one of the world’s most beloved and acclaimed entertainers of our time and a singular and original superstar whose creative genius knows no bounds,” said Martin Nolan, Executive Director of Julien’s Auctions. “We are also honored to announce that Mr. Martin plans to donate 100 percent of the proceeds he receives from the sale, to the Motion Picture & Television Fund’s Country House and Hospital, in honor of Steve Martin’s good friend, the legendary actor Roddy McDowall.”