From my Personal Collection is Today’s “Featured” Prop is a Klingon Headpiece from what I believe is Star Trek VI: The 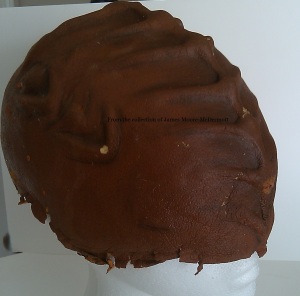 Undiscovered Country based on wear and style of Klingon ridges. The Headpiece is made of foam latex rubber and has some wear from use.  I keep all Foam latex items protected from the elements , usually stored for display in a case of some type, even shadow boxes work. The Klingon Headpiece was originally sold by Profiles in History Hollywood Auction 27 April 5, 2007 Lot #611. The Headpiece is from the lot described as “Collection of head & facial make-up appliances from various Star Trek films and series”.

Here is a screenshot from Star Trek VI showing the headpiece on screen.