Propworx is proud to announce that we are holding yet another week of Battlestar Galactica related auctions on eBay! With over 30 unique item’s listed, there is something for everyone, including a limited edition numbered cast print:

Limited edition print of the BSG “Last Supper” given to cast and crew members who worked on the show. This Print is framed and matted and comes direct from a crew member.

As well as an incredible set of Colonial paper and metal cubits, and a very rare cast and crew jacket!

Set of three Colonial paper noted, one 500 and two 500 with a set of three gold and three silver metal cubits. These were used by Colonial members for purchases and gambling. Production noted these items as being production made but not used.

Blue cast and crew jacket with the BSG-75 logo patch on the arm, these crew jackets were often seen on set being worn by crew while shooting scenes outdoors. 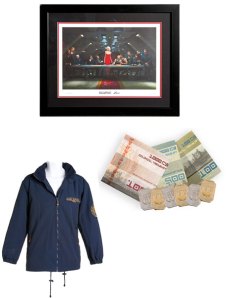