The force has been awakened in the upcoming Prop Store Live Auction. The Prop Store auction is scheduled for September 23 and features 450 lots of amazing props, costumes, production items from decades of Hollywood movie magic.

Two and half months after the Prop Store auction the newest and highly anticipated addition to the Star Wars legacy will be released in theaters Star Wars: The Force Awakens. In this article I would like to take a look at five crazy cool Star Wars props/costumes from the “Original Trilogy” that started it all and will be up for bidding in the September auction.

There is much debate by Star Wars fans on the use or creation of these furry mammals in Return of the Jedi. My take on the whole Ewok thing is that I always viewed them kind of like the David versus Goliath or like nature versus technology. No matter where you fall in that particular debate these little guys are cool and having been design by the legendary Stuart Freeborn would make a nice discussion piece to most collections. Auction estimate £1,000 – £2,200. 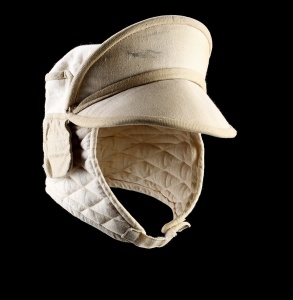 Every Star Wars fan knows and most agree that The Empire Strikes Back is the best of the original trilogy. Direct from the scenes on planet Hoth this is a screen used Rebel Trooper Hat. Just think this hat could have been starring down the barrel of a blaster directly at an AT-AT in the epic battle of Hoth! Auction estimate  £15,000 – £20,000.

My number 3 pick is something that I never knew that it existed after production wrapped. This Darth Vader/ Anakin Skywalker reveal make up was worn by English actor Sebastian Shaw in the final scenes of RTOJ. I remember watching this scene in the original theater release as a kid and I think I teared up a bit because Luke for the first and last time got to look at his father as he truly was.  This is an amazing one of a kind piece of Star Wars history from a very memorable scene. Auction estimate £30,000-£40,000. 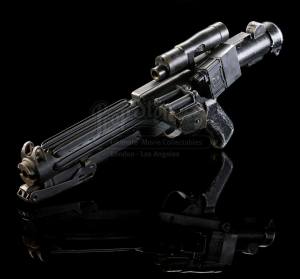 No Stormtrooper would be complete without his standard issue E-11 blaster. This is a Hero version of the weapon used by the empires foot soldiers and was based on a standard Sterling sub-machine gun. There is a lot of cool factor with this prop as it is very recognizable and it is a main “Hero” prop used in the making of the Star Wars: A New Hope the movie that started a legacy. This is an iconic piece that would really stand out on it own and yes it would look good in your collection. Auction estimate £15,000 – £20,000.

Now here is my number 1 pick of all the Star Wars lots in the Prop Store Live Auction. This is no ordinary Stormtrooper helmet, this is an Empire Strikes Back screen used helmet. What also makes this way cool is that it is almost instantly recognizable as being from the Star Wars trilogy so it has lots of “WOW” factor. Authentic Stormtrooper helmets are rare in how often they make it to auction, most collectors would not let one of these leave their collections. If you collect Star Wars then you need to add this to your collection, trust me you will be the coolest of them all! Auction estimate £40,000-£60,000.

There are many lots of Star Wars memorabilia with lower estimates than my top 5. Here are my honorable mentions of Star Wars lots from the Prop Store Live Auction.