Gerry Anderson was an iconic Writer, Producer, Director and Creator of the most notable Thunderbird film and

television show of the 1960’s. To celebrate the creativity of such a legend the UK based The Prop Gallery will be having a week of listings featuring various props used in the many films and television shows.

The Gerry Anderson week is scheduled to take place September 8th through September 10th 2015. A total of 12 artifacts in all will be featured for sale on The Prop Gallery website. Fans and collectors can expect to see 4 unique props used in the various series to be released each day of the event week so you will want to check the site each daily around 16:00 GMT.

Gerry Anderson (1929-2012) is credited as the creator of the process known as “Supermarionation” a form of marionettes. Supermarionation meant that traditional marionettes of the time were modified with electronics to allow for a more lifelike performance including functional lips to allow for the actors voices to synchronize to dialog.  Gerry Anderson’s credits include Supercar, Stingray, Fireball XL5, Thunderbirds, Space 1999, Terrahawks, UFO, Captain Scarlet and the Mysterons, Joe 90 and much more credited to his name.

To celebrate the upcoming event of new listings The Prop Gallery has provided a preview of items that will be listed, see below. Be sure to visit http://www.thepropgallery.com/ to view all the listings.

Lady Penelope’s Mondrian Dress: This costume was custom made for the production and worn on screen by the now iconic character of Lady Penelope Creighton Ward who was modelled on series co-creator Sylvia Anderson. A member of high society and International Rescue’s London Agent Lady Penelope is also a fashion icon and this is reflected in her stylish and constantly changing attire throughout the series. This particular dress was worn by Lady Penelope in the episode The Duchess Assignment and is clearly seen on screen as she visits the art exhibition with Jeff Tracy. The dress was inspired by the The Mondrian Collection of the period, a collection of cocktail dresses created by French fashion designer Yves Saint Laurent and inspired by the paintings of noted Dutch artist Piet Mondrian. 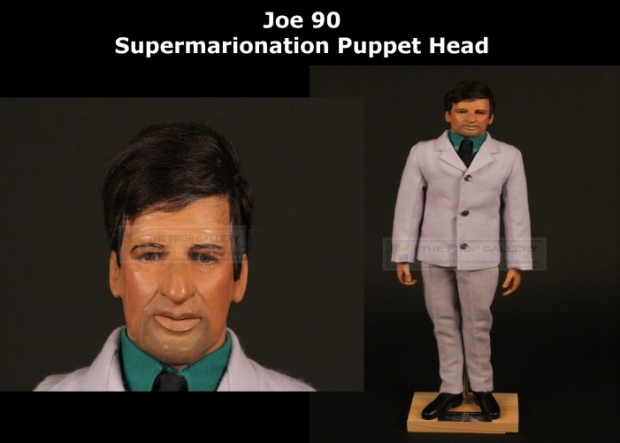 Joe 90: This puppet head is an original created during the production of Joe 90 and used on screen in the episode Viva Cordova, a fine sculpt the head retains its original studio paint finish and is complete with its original hair to the main part of the head to include the eyebrows. The detachable rear of the head is a faithful reproduction created and wigged by series puppet maker Terry Curtis who also replaced the eyes and internal mechanism when he carried out some restoration to the neck area of the puppet head. The head is displayed on top of a reproduction body and high quality clothing of the same style he wears on screen, this work was again carried out by Terry Curtis and is not unusual in itself as original studio bodies are extraordinarily rare with very very few known to exist.

“Doppelganger” Derek Meddings Phoenix command module concept artwork: This is the original hand drawn concept artwork for the Phoenix command module featured in the movie. Designed by legendary special effects director Derek Meddings, a prolific designer of Anderson productions, who would later become an Academy Award winner and one of the most highly respected and influential effects talents of his generation. Accomplished in pencil on white paper the concept artwork is highly detailed and epitomises Meddings’ trademark futuristic style. The miniature effects of this production rank amongst Meddings’ most celebrated and this represents an excellent example of concept artwork by a man whose contribution to the success of Anderson productions can not be overstated.

About The Prop Gallery….

The Prop Gallery is a retailer of artefacts used in the production of film and television with a focus on vintage items. Founded in 2011 by Jamie Smyth and Derek Rushton with a combined 30 years of experience in researching and collecting film and television artefacts. Collectors and fans looking to acquire something unique to their collection can visit the website to view new listings as The Prop Gallery posts items several times a week throughout the year.