If there’s something strange in your neighborhood, who you gonna call? The Ghostbusters, of course! But what if you are looking for collectibles across a variety of categories, who can you turn to? Hake’s Auctions, naturally.

Hake’s is no stranger to providing fans of all groupings the chance to find a new piece for their collections. A staple of the auction house is their selection of movie memorabilia, and this year is no different. Auction #225 is offering ecto-fans the chance to trap a truly covetable screen prop – the metal free-wheeling Ghost Trap prop used in both 1984’s Ghostbusters and its 1989 sequel Ghostbusters II.

Written by Dan Aykroyd and Harold Ramis, both films in the supernatural comedy franchise were directed and produced by Ivan Reitman. The films center around a ghost-catching organization that combats paranormal activities. Bill Murray, Aykroyd, and Ramis star as eccentric parapsychologists turned proton-wielding Ghostbusters. They later enlist Ernie Hudson as their first recruit and save a possessed Sigourney Weaver and Rick Moranis from the clutches of two demonic spirits. Although the first film ends with the the Ghostbusters welcomed as heroes, the follow-up film finds them disbanded and disgraced.

That is until a threat from Vigo the Carpathian pulls them back into the line of action and into the hearts of New Yorkers. Between the one-liners from Murray and Aykroyd, the iconic imagery of the Stay Puft Marshmallow Man and a walking Statue of Liberty, as well as the instantly recognizable theme by Ray Parker Jr., The Ghostbustersremain a cultural phenomenon of the ’80s and is widely considered by many as one of the best films of all time.

The Ghost Trap comes complete with electrical wiring and connections, hydraulic foot pedal, and remote control box that allows opening and closing of the trap’s doors. The concept for the trap was conceived by Aykroyd and this example is one of four manufactured by special effects artist Chuck Gaspar. This prop was photographed for special effects sequences and was screen-used before finding residence with executive producer Michael C. Gross.

Having been used in both films, the prop does show some scattered wear, but includes a professionally repaired handle, photocopies from an original 1991 auction sale, instructions for use, and a letter from Gross. Unfortunately, ghosts are not included in this iconic piece of 1980s pop culture. Yet.

Bidding on this incredible rarity has already begun, but before you get you streams crossed, bidding doesn’t close until November 13-15, 2018. To get started on bidding or to browse through additional offerings being featured, visit hakes.com. 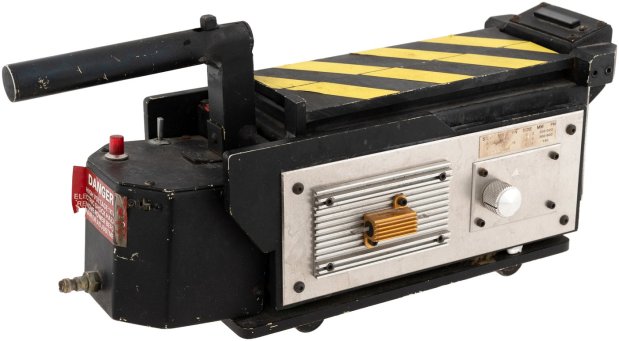