LOS ANGELES- June, 2019- Profiles in History is proud to announce treasures from the collection of legendary Writer, Director, Producer, Frank Darabont, are going up for auction on Thursday July 11th 2019 in Los Angeles. Items include comic and illustration art, movie posters, props, costumes and more from some of the most iconic films and TV shows ever made. Highlights are below.

The Walking Dead “Patient Zero” zombie bust by Greg Nictoero. This was the first Zombie makeup FX artist, producer, and director Greg Nicotero created for the The Walking Dead, which series creator Frank Darabont used to pitch the show to TV networks. It’s pictured left and estimated to sell for $6,000 – $8,000.

A Bernie Wrightson original painting titled, “Council to a Minion.” In 1976, at the height of his artistic powers, Wrightson created this painstakingly detailed painting, perhaps his greatest, filled with dread, nuance, atmosphere, and humor. It’s pictured right and estimated to sell for $100,000 – $150,000.

A rare, vintage, Italian poster for Frankenstein (1931), director James Whale’s adaptation of the Mary Shelley novel, which catapulted the career of Boris Karloff as the most recognizable monster in cinema history. Estimated to sell for $20,000 – $30,000.

A Raiders of the Lost Ark 3-sheet movie poster signed and inscribed by Steven Spielberg to Frank Darabont. Spielberg writes, “Frank, You make movies with the same passion you revere them. Steven Spielberg”. Estimated to sell for $3,000 – $5,000.

A full-scale iconic “Lawgiver” statue from Planet of the Apes. This 8-foot-tall statue was created from molds of the actual original screen used figure by the Academy Award- winning special effects company KNB EFX GROUP. Estimated to sell for $8,000 – $12,000. 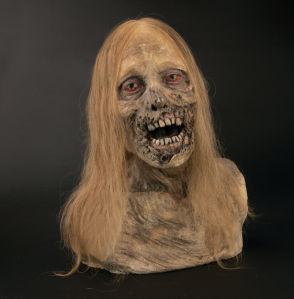 The Walking Dead “Bicycle Girl” zombie bust by Greg Nicotero. A limited edition bust of the first Zombie that Rick Grimes sees when he wakes from his coma in the series premiere of The Walking Dead, written and directed by Frank Darabont. A bust from this edition is in the Smithsonian Museum. It’s pictured left and estimated to sell for $3,000 – $5,000.

John Alvin original poster artwork for “Sand Pirates of the Sahara” from The Majestic. Classic Hollywood-inspired artwork by famed movie poster artist John Alvin (E.T. the Extra-Terrestrial, Blade Runner, Gremlins). Commissioned by Frank Darabont for use in the film starring Jim Carrey, set in the 1950s. Estimated to sell for $4,000 – $6,000.

A Bernie Wrightson original Frankenstein illustration published in The Lost Frankenstein Pages.  A definitive work, containing all the elements of the story: the doctor, the monster, and the lab. Without a doubt, the finest Wrightson published Frankenstein plate to be offered at auction. It’s pictured right and estimated to sell for $100,000 – $150,000.

ABOUT PROFILES IN HISTORY
Founded in 1985 by Joseph Maddalena, Profiles in History is the world’s largest auctioneer & dealer of original Hollywood Memorabilia, historical autographs, letters, documents, vintage signed photographs and manuscripts. Born into a family of antiques dealers in Rhode Island, Joseph “Joe” Maddalena learned early on how to turn his passion of collecting historical autographs into a career. Upon graduation from Pepperdine, Joe pursued his passion to become a full-time dealer of historical documents, and opened his first office in 1985. Profiles in History has held some of the most prestigious and successful auctions of Hollywood memorabilia and own virtually every Guinness Book record for prices of original screen-used memorabilia.  Highlights from their previous auctions include the “Cowardly Lion” costume from The Wizard of Ozfor $805,000; Steve McQueen’s “Michael Delaney” racing suit from Le Mans for $960,000; From the history-making Debbie Reynolds Auction in June 2011, Profiles in History sold the Marilyn Monroe “Subway” Dress from The Seven Year Itch for $5.52M and the Audrey Hepburn Ascot Dress from My Fair Lady for $4.44M. In February 2012, Profiles in History arranged the sale of a pair of Judy Garland screen-used Ruby Slippers from The Wizard of Oz  to the Academy of Motion Picture Arts & Sciences. In June 2017, at his Hollywood Auction 89, Joe sold the Gary Cannavo collection of Battlestar Galactica spaceships for 1.8 million dollars, the Saturday Night Fever dance floor for 1.2 million and an R2D2 for 2.76 million.  In May 2018, Joe sold the Big Book of Alcoholics Anonymous for 2.4 million. In addition, Joe Maddalena was the star of Hollywood Treasure, which aired on Syfy.  Hollywood Treasure took viewers into the fascinating world of showbiz and pop culture memorabilia.