Los Angeles, California – (November 26, 2019) – Julien’s Auctions, the world-record breaking auction house, has announced its star-studded event ICONS & IDOLS: HOLLYWOOD to take place on December 16, 2019 at Julien’s Auctions in Beverly Hills and live online at juliensauctions.com. This year end extravaganza offers over 400 items taken out of the vault and production archives of Hollywood’s greatest films from the Golden Age of Hollywood to today’s modern and new box office classics as well as important artifacts, rarely seen or coming to the auction block for the first time.

The top coming attractions on the auction marquee are two original iconic props with tremendous provenance that were featured in two of Hollywood’s biggest film franchises of all time: The Lord of the Rings trilogy and the original Superman starring Christopher Reeve.

An original tobacco pipe used by Sir Ian Holm Cuthbert CBE (Ian Holm) in his iconic role as the hobbit Bilbo Baggins in The Lord of the Rings: The Fellowship of the Ring (New Line, 2001), This is the first Bilbo Baggins pipe that has ever been made available to collectors and investors at auction and the first time an original prop from The Lord of the Rings trilogy has come with documents from both Peter Jackson and a principal member of the production, the Academy Award-winning Animation Supervisor, Randall William Cook. Included with the prop is the original birthday card from Peter Jackson to Randall Cook when the gift was presented to Cook on his birthday as well as a letter of authenticity from Cook. The pipe is estimated to sell at $100,000-$120,000. 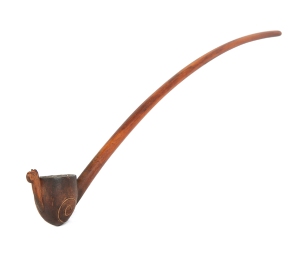 One of the most recognized superhero costume pieces of all time that captured the hearts and imaginations of fans around the world and is a symbol of truth, justice and the American way soars onto the auction block. An original cape worn by Christopher Reeve in his iconic role as the Man of Steel in Superman (Warner Bros., 1978). This costume piece was part of a world-wide contest to promote the movie’s release in 1979 with the grand prize being one of the six original capes made for and used in the film. The winner was personally selected by Christopher Reeve himself, and the cape includes a letter from DC Comics’ President as well as the Editor and Publisher and a copy of a photo of Reeve choosing the winner and more. The cape is estimated to sell at $100,000-$200,000 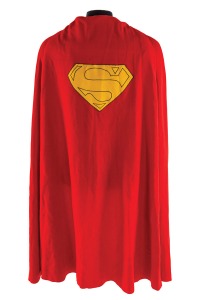 Julien’s Auctions is pleased to present one of the most extensive and important collections of costumes, props, memorabilia and models from the Star Trek TV and film franchise to ever to come to auction, including some of the finest offerings from the official CBS and Paramount Studios auction in 2006, with a total of nearly 50 lots.

The collection’s top prize comes from the star of The Original Series  and one of sci-fi’s greatest heroes, Captain Kirk himself. A Starfleet command/officer’s jacket worn by William Shatner in his legendary role as Kirk in Star Trek II: The Wrath of Khan (Paramount, 1982) reports to auction at an estimate of $80,000-$100,000. This jacket was kept after filming by the film’s director, Nicholas Meyer, and will be only the second time it has come up for auction since the release of the film in 1982.

Some of the most coveted costumes from the series, with a focus on Star Trek: The Next Generation and Star Trek: Voyager, include Starfleet uniforms for Captain Picard, William Riker (Season One), Deanna Troi, Geordi La Forge and Worf (both Season Two), a rare Deanna Troi Season One jumpsuit, and episode specific costumes such as Captain Picard’s Klingon robe, Sarek’s death scene costume, Spock’s Romulan disguise, Doctor Noonian Soong, as well as Worf’s iconic baldrics from both Season One and Season Two, phaser rifles, and more. Also on offer are Starfleet costumes for the entire Voyager crew as well as a signature bodysuit from fan favorite Seven of Nine.

Other top highlights of the auction include:

“This exceptional selection of over 400 important and rare Hollywood memorabilia is the stuff that dreams are made of,” said Darren Julien, President/Chief Executive Officer of Julien’s Auctions. “These iconic pieces from the Superman cape worn by Christopher Reeve to new classics such as Ian Holm’s Bilbo Baggins’ pipe from The Lord of the Rings have transcended its origins from mere film props to our most recognized and revered symbols of pop culture.”

The Bidding can be done in person or online on Monday, December 16th 2019 starting at 10:00 a.m. For more information visit Juliens Auctions Website see the links in this article.