Los Angeles, California – (March 11th, 2021) – This spring, Julien’s Auctions, will offer some of the most iconic pop culture relics of all time to the public and collectors with their HOLLYWOOD SCI-FI, ACTION, FANTASY AND MORE AUCTION, part of the world-record breaking auction house to the stars’ blockbuster Hollywood memorabilia event of the year. The two-day auction kicks off with their HOLLYWOOD LEGENDS & LUMINARIES AUCTION featuring property related to glamourous movie stars from Hollywood’s Golden Era including Marilyn Monroe, Doris Day, and Greta Garbo up to the modern era. The auctions will take place on Wednesday, April 28th & Thursday, April 29th, 2021 at Julien’s Auctions in Beverly Hills and live online at juliensauctions.com. 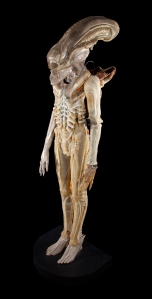 Xenomorph costume designed by the Academy Award-winning and revered surrealist artist and sculptor, H.R. Giger from the 1979 seminal sci-fi horror classic, Alien. Long believed to have been lost and destroyed, this original translucent prototype (known as “Big Chap”) for the terrifying creature character was created for consideration by the film’s celebrated director Ridley Scott during the early stages of the film’s pre-production. Comprehensive lighting and camera tests were conducted by the pre-production team to demonstrate the potential; however, the non-translucent costume was the final result and the character development with Giger would go on to spawn one of Hollywood’s most legendary horror icons ever to come on screen. This extraordinary costume is now considered the rarest and most elusive artifact from the blockbuster film franchise and has a conservative estimate of $40,000 – $60,000.

“This rare and mysterious artifact from the Alien movie mythology is as much a piece of fine modern surrealist art, as it is a piece of Hollywood history” said Martin Nolan, Executive Director and CFO of Julien’s Auctions. “It is a miracle that H.R. Giger’s designed and sculpted Alien translucent costume prototype survived. Julien’s Auctions is honored to erect this legendary piece in a once-in-a-lifetime exhibition at our gallery in Beverly Hills for Alien and Giger fans and collectors before its sale at auction for the first time.”

Other items from the Alien franchise include: a complete costume worn by Sigourney Weaver, as a clone

of her legendary character Ripley in the film Alien Resurrection, as well as a costume worn by Winona Ryder from the movie. The films’ wardrobe (estimate each lot: $10,000 – $20,000) was designed by Academy Award winner Bob Ringwood and inspired by fashion iconoclast Jean Paul Gaultier.

Another piece of celluloid history is a deep blue, original pinstripe gangster style three piece suit, worn by six-time Academy Award-winning legend Al Pacino as Miami drug lord Tony Montana in the memorable and climactic final act of Brian DePalma’s popular 1983 crime drama, Scarface. The suit is possibly the only remaining original Scarface pin-stripe gangster suit costume from the film’s climax in existence and can be screen-matched to the sequences wherein Tony Montana nose dives into a mountain of cocaine in the office of his fortress-like mansion. 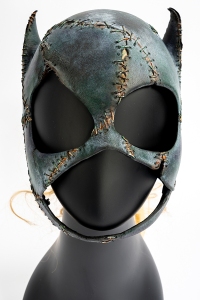 From the blockbuster Batman film franchise, comes an assortment of exemplary original pieces from the movies including screen-used production artifacts from the first four Batman movies: 1989’s Batman, 1992’s Batman Returns and 1997’s Batman Forever and Batman & Robin. Highlights with starting estimates include: an original Batman bodysuit with cape worn by Val Kilmer in Batman Forever ($40,000 – $60,000), a utility belt worn by Michael Keaton in Batman accompanied with a note on the film director Tim Burton’s stationary ($5,000 – $7,000); a cowl worn by George Clooney for his turn in the suit in Batman & Robin ($10,000 – $20,000); an original cowl worn by Catwoman portrayed by Michelle Pfeiffer in the climactic final scenes of Batman Returns ($8,000 – $12,000) (photo left) as well as a massive light-up prop rifle brandished by Arnold Schwarzenegger as Mr. Freeze in Batman & Robin ($20,000 – $30,000).

“Yippee ki-yay!” Die Hard, one of the biggest action movie franchises of all time which turned actor Bruce Willis into 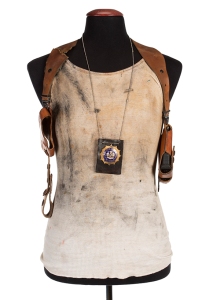 an international superstar in his role as New York police officer John McClane, returns with a vengeance in the sale of his iconic screenused Zippo lighter famously used throughout the original film that started it all. The Zippo (estimate: $10,000 – $20,000) is accompanied by a letter from the Property Master stating that this is the only Zippo used throughout the 1988 film production.

In a galaxy, far, far away from the most iconic movie franchise of all comes an original Imperial Scout Trooper (“biker scout”) Blaster (estimate: $20,000 – $30,000) from the 1983 film Star Wars: Return of the Jedi hurtling toward the auction block with provenance from the film’s acclaimed Art Director, James Schoppe. Also, from the Star Wars history books comes one of the most surprising new discoveries in recent years: the original costume illustrations by legendary designer, Bob Mackie, for the Star Wars Holiday Special. The 1978 television special was considered the most controversial Star Wars release of all time and was broadcast only once on television with the special still not made available today via streaming or DVD. For the first time ever, this collection of eight one of a kind original hand illustrated costume designs by the Emmy Award-winning designer, which has been held in Mackie’s personal archives for over 40 years, will be offered at auction.

Another prop considered one of the most iconic relics in cinema is a pair of original, screen used “scissorhand”

Fans and collectors will be able to peruse the history and provenance of these extraordinary items from their favorite films in Julien’s special limited-edition Hollywood Legends catalogues with four different catalogue covers specially designed for this exclusive event featuring Alien, Batman, Scarface and Edward Scissorhands. (Pictured Below)

My Tweets
Join 411 other followers